This opinion piece by Bob Brym and Howard Ramos was published by iPolitics on April 26, 2013. Since that piece is behind a paywall, it is reproduced here with permission.

When questioned during a news conference Thursday about an alleged plot to blow up a Via Rail train, Prime Minister Stephen Harper — making a dig at his Liberal rival, Justin Trudeau — said that “this is not a time to commit sociology.”

Why not? Why does the prime minister consider it an offence — or perhaps a sin — to use sociology to help shed light on the roots of terrorism or, for that matter, other pressing problems in contemporary society?

Part of Mr. Harper’s thinking may be based on a belief that, in the face of disaster and terror, many people just want to hear a strong voice of reassurance and authority. There’s another, more sinister interpretation of his comments: If you probe too deeply into the roots of terrorism or other problems, you might come to the conclusion that Conservative party’s ‘solutions’ themselves are suspect. It follows that thinking sociologically must to be avoided at all costs.
END_OF_DOCUMENT_TOKEN_TO_BE_REPLACED

From the ASA Faculty Salary Brief: 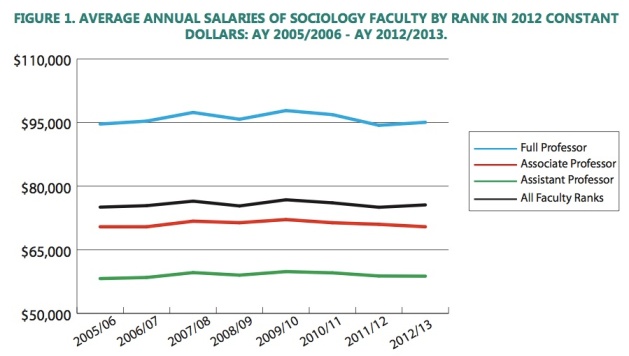 Perhaps you need to relocate to Canada, where we don’t necessarily collect data on sociologists’ salaries, but the Ontario Sunshine List gives us a hint that there are plenty of sociologists up here who break the six-figure barrier. Plus, a real pension, all the snowballs you can throw, and summer breaks that run April-August. It’s a northern paradise! Tempting? I hope so, because my department is hiring a Chair.

END_OF_DOCUMENT_TOKEN_TO_BE_REPLACED

This story in the NY times is a pleasant read among all the bad news in the digital papers these days. It shows that recent data reveal an interesting trend–support for same-sex marriage among all age cohorts:

As Shamus and others have remarked, this is a very dramatic shift, which is very unusual for public opinion. Cohort turnover, rather than changed minds, explains most changes in opinion over time, but this issue is different.

I have done some work that shows a similar trend in attitudes toward homosexuality–attitudes changing in all age cohorts, in addition to generational turnover–and the story today reminds me of that time I was just fiddling around with those World Values Survey data. This was way back in time when the blogosphere was young: 2005. I didn’t really trust myself to do data analysis, and I checked in with Jeremy Freese to get some help with how to interpret the data. He asked me the million-dollar question (which I still have, thanks to gmail): END_OF_DOCUMENT_TOKEN_TO_BE_REPLACED

I know, I know, no one cares about ice hockey. Except Canadians, Russians, and sociology bloggers, that is. Up here, hockey is in the news because someone did a study to dispel a widely held myth so stupid that it burns. The idea is that introducing body checking in hockey at a younger age reduces the number of concussions and other injuries. If they learn to check earlier, it is held, they will be better at it, so it won’t cause as much damage. This is like saying the more you hit a hammer with a nail the more resistant the nail will become to sinking into the wood. END_OF_DOCUMENT_TOKEN_TO_BE_REPLACED

They call Alberta the Texas of Canada. The province extracts oil, raises cattle for beef, and it has a long history of evangelical Christians as political leaders. Its policies are the most conservative in Canada. Albertans pay no sales tax, and the provincial income tax is a flat 10%. And yet, the conservatives who have been a majority government for 40 years, the Progressive Conservatives, faced a challenge this week in provincial elections from a still-farther right party, the Wildrose Party.

END_OF_DOCUMENT_TOKEN_TO_BE_REPLACED

Occupy Toronto has been going strong for a few weeks now, hosting protest marches on Saturdays and camping out in a park downtown, not far from Bay Street, Toronto’s financial district. Some might ask, why would Canadians want to participate in this movement? Canadian banks were subject to much stricter regulations than their American counterparts, and this meant that the subprime mortgage crisis, and the collapse of financial institutions that necessitated a more-than-major bailout stopped at the border. Canada didn’t make bad loans, our financial companies were not implicated in the mortgage-bundling schemes of Wall Street, and so our recession is not so much the product of Canadian policy as it is the result of our economy being so reliant on trade with the United States.

END_OF_DOCUMENT_TOKEN_TO_BE_REPLACED

Just my impression, but it seems like progressives are more and more doing this kind of thing: directly attacking unfair attack journalism instead of either being overly calm or just avoiding the networks.

Canada Post is on strike. There will be rolling strikes across the country until the union can reach a contract with the crown corporation. It is a tough time to be a union these days. But imagine being the union representing postal workers. They are fighting against the classic union buster: the two-tiered salary structure, but their only weapon is the strike, and in this case, the union is engaging in a rolling strike, in which one city after another will have a short work stoppage. Unfortunately for them, these days a postal strike is not much more than a holiday from junk mail.

Already, the editorials on this topic carry headlines like:

The union just has very little weight on its side. As the volume of mail decreases (and the volume of quality mail almost disappears), the cost of delivering the mail increases without the workers getting a cent more. I wish them all the best, but I don’t see what is going to prevent this rolling strike from just carrying on indefinitely.

I am so excited about the Canadian Sociology Association’s new website that I want to shout it out in all caps. (Don’t worry; I’ll restrain myself.) It is a professionally designed website, with actual information on it! And with images! And a readable font!

And thank goodness, once again, for the Wayback Machine, so that I can show you what the old website looked like. Take a look, and if your eyeballs haven’t melted, then ponder how that could be the website of a national academic professional association not of 1992, but of 2009.

Just over a year ago, the membership voted to increase their own fees to pay for the new website. Good choice, Canada. I am with you.

It’s time again for the year-in-review lists, and here is my fave of faves, Husband’s 2009 Best of Alternative Music list (iTunes link–should take you to the Canadian store*). I’ve mentioned before that Husband is a long-time list maker, and this was a good year for this genre.

I was also going to point out how much more awesometastic the Canadian list is than the American one (which is usually more boringly mainstream), but then I found out that the US store doesn’t even have a Best of Alternative list! It’s a tragedy for all the Rob Gordons of the world, who would be dying to spend 100+ hours to make such a list and donate it to Apple just for the love of music. And lists.

*To get to the Canadian store, click the little flag circle at the bottomest right on your iTunes main page.

My colleague Neil McLaughlin has a blog post over at Canada’s Academic Matters that argues that it is unethical to require students to buy your own books, or at least to profit from the sale of those books:

There are, of course, good pedagogical reasons why a professor might want to assign a book they have written. The professor might genuinely believe it is the best textbook on the market, there is an advantage to going through the material that a professor knows well and has covered in a textbook she has written on the topic and there are few better educational experiences than reading a first-rate research monograph and having in-depth discussions of it with the author. But what possible justification could one give for keeping the royalties for oneself, as opposed to giving this portion of the proceeds to a student group or some such public good?

Frankly, this thought never even crossed my mind. END_OF_DOCUMENT_TOKEN_TO_BE_REPLACED

Back from the Canadian Soc meetings, and it was much better than I expected. The Author Meets Critics session I participated in was a unique opportunity to discuss ideas about the role of political institutions in social change and their relationship to social movements. The reception was a nice chance to meet a few new people and say hello to some others I hadn’t seen in a while. It also reminded me just how small the Canadian sociology world is, as the reception for all of sociology was smaller than the receptions for the ASA section receptions I have attended.

In the past, the Canadian meetings left me feeling like I had shown up to the prom without a date, but this time I had plenty of socializing to do. It probably was not the fault of the meetings; I think it just takes a while to build up networks in a new place. But the best part of all is that I heard that in the business meeting, the association voted to raise our membership fees to hire a web designer. Though I had nothing to do with it, I will count it as yet another Scatterplot victory.

The annual meeting of the Canadian Sociological Association is next week. Is anyone scatterplottish planning to attend? I’d love to meet up.

This will be my third attempt to penetrate the puzzling structure of the Canadian meetings. END_OF_DOCUMENT_TOKEN_TO_BE_REPLACED

I’m going out on a limb to declare mine the first sociology course podcast featured by iTunes:

END_OF_DOCUMENT_TOKEN_TO_BE_REPLACED

President Obama stopped by Ottawa yesterday, making Canada his first foreign visit since taking office. It made us feel all squiggly on the inside. This morning, there are reports that he bought maple leaf cookies and a snow globe. He and Prime Minister Harper discussed trade relations, the economy, and the environment. Apparently, more sensitive discussions were avoided, such as that potentially nasty debate over the merits of basketball versus hockey as Best Sport Ever.