Last month, there was a fair bit of reporting around a new survey looking at Americans’ knowledge of and opinions about the Holocaust. The survey was conducted on behalf of The Conference on Jewish Material Claims Against Germany, and is reported (with not too much detail) here (topline results here, methodology brief here). Much of the coverage took what I would call an alarmist tone, emphasizing the seemingly low rate at which Americans (and especially those no-good, ignorant millennials) understand the Holocaust. For example, Newsweek’s sure-to-go-viral headline was “One-Third of American Don’t Believe 6 Millions Jews were Murdered During the Holocaust.” The NYT titled their story about the survey “Holocaust Is Fading From Memory, Survey Finds.”

This coverage is frustrating because the survey itself and the website by the organization that ran the survey offer no over-time comparisons. The survey does not offer data to support the claim that the “Holocaust is Fading From Memory,” at least not in terms of the questions discussed in the news coverage. The Newsweek headline is worse, in that it implies that 1/3 of Americans are Holocaust deniers of some sort; in fact, the survey found that 96% claimed to believe in the Holocaust, 1% claimed not to, and 3% were not sure. Given our current political epistemic nightmares around, e.g. climate change, I’m not super anxious about a 96% agreement on the Holocaust.*

But back to the “fading from memory” question. The NYT puts the data this way: “Thirty-one percent of Americans, and 41 percent of millennials, believe that two million or fewer Jews were killed in the Holocaust; the actual number is around six million.” Here we see the millennial blame game, but other than perhaps the implicit assumption that the 41% figure will not change over time as millennials age, there’s no other data that could back up a “fading from memory” claim. That said, the claim still might be true! If only we had some evidence.

A bit of searching failed to turn up a clear, consistently worded, time series of poll results on knowledge about the Holocaust, but I did find a very useful Roper Center report, “Public Understanding of the Holocaust, From WWII to Today.” The Roper Center notes some selected findings from surveys conducted in 1940s, 1980s, and 2000s. For example:

A 1985 Time/Yankelovich, Skelly & White found that only 69% of respondents could say what the Holocaust was in their own words. When Americans were asked by the American Jewish Committee/Taylor Nelson Sofres in 2005 how many Jews died in the Holocaust, just 33% were able to select the correct number, while only 44% were able to identify Auschwitz, Dachau and Treblinka as the names of concentration camps.

I’m not remotely saying that we should be pleased that almost half of Americans were unable to identify the names of concentration camps in 2005, but I am saying that such data can usefully inform the question, “are we forgetting the Holocaust?” Put another way: we never completely remembered the Holocaust. Is it worse now than in the 2000s or 1980s or…?

To go a bit further, I went into the iPOLL database to look at some of the questions underlying these claims. The question wordings are not all consistent with the 2018 survey, unfortunately, but this question about how many died in the Holocaust was repeated almost identically. First, from 1992: 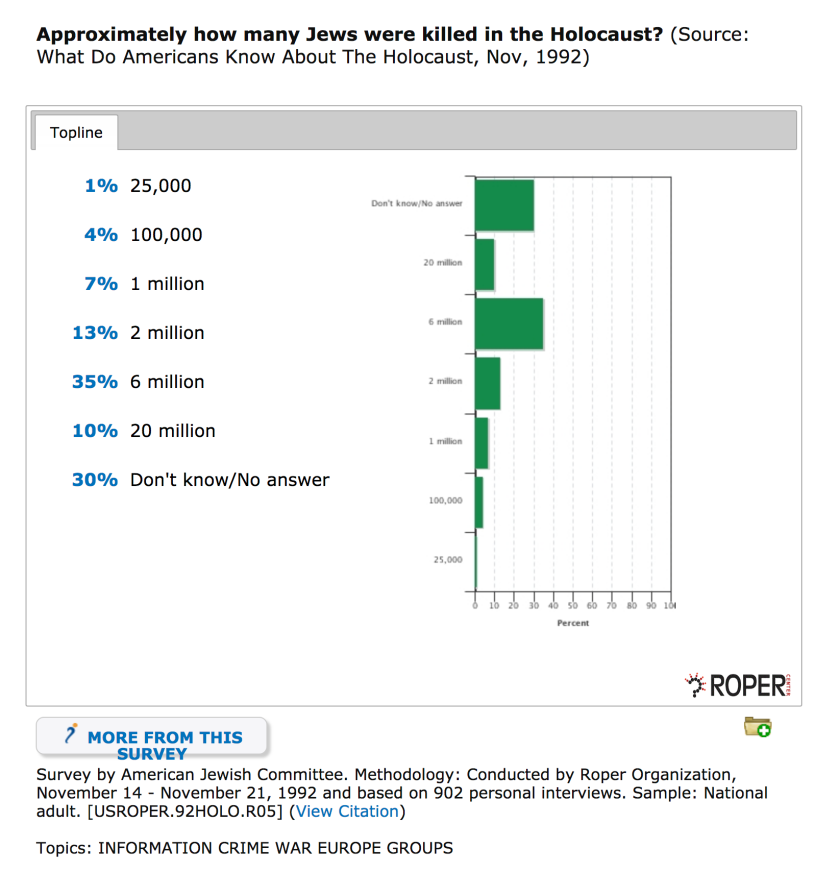 Now, there are lots of reasons to be cautious. These were different surveys with different surrounding questions, the first has a much higher Don’t know/No answer rate which could reflect interview protocols for prompting for answers, etc. And whether it’s 35% or 49% that got the correct answer, that’s nothing to be super proud of, and certainly no reason to cut back on Holocaust education (which, interestingly, 88% of Americans agree should be mandatory). But to the extent we have good evidence on the trend in this question, it does not seem to be the case that the Holocaust is “fading from memory.” To their credit, the Conference frames their study around persistent gaps and the need to institutionalize memory while the last survivors remain with us. But the media coverage was far worse, and far more alarmist.

* The trend on believing the Holocaust happened looks flat or positive as well. Here’s the most comparable question, showing that in 1994, about 2% reported the Holocaust “probably” or “definitely” did not happen, with 83% reporting “definitely happened” and 14% “probably happened.” The 2018 survey did not allow for probably vs. definitely answers. If you ask the question other ways, you may get very different results, however. In 1994, when asked “(As you know), the term Holocaust usually refers to the killing of millions of Jews in Nazi death camps during World War II. Do you doubt that the Holocaust actually happened, or not?” a full 9% reported doubt.