The following is a guest post by Emily Beam.

There are few things more satisfying than finding another reason that millenials are the worst. They’re narcissistic, coddled, unpatriotic, racist, and nervous about free speech. And now, millennial men want a return to the nostalgic 1950s, with women in the kitchen, whipping up a nice quiche after a hard day on the line.

This is the story presented in Stephanie Coontz’s Friday piece in the New York Times, “Do Millennial Men Want Stay-at-Home Wives,” which reports on evidence from the Council on Contemporary Families (using the General Social Survey) and from sociologists Joanna Pepin and David Cotter (using Monitoring the Future ).

Journalists have gone a bit nuts for this millennial-as-Ward-Cleaver narrative, consistent with what we already know about garbage millennials, and stories from Quartz and Time Magazine have already popped up.

The Times piece includes this damning trend among men ages 18-25:

But the GSS just released their 2016 data this week. 89% of men disagree or strongly disagree with the statement “It is much better for everyone involved if the man is the achiever outside the home and the women takes care of the home and family” – the highest rate among either men or women ages 18-25 in the GSS’s 40-year history. It’s also much higher than the rate reported by everyone older than 25, about 71%. 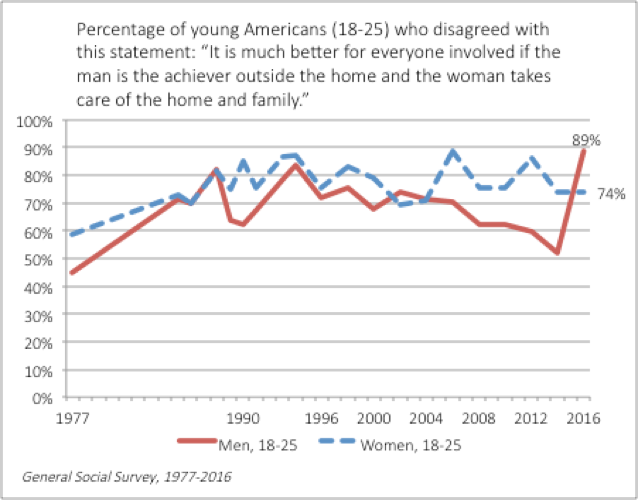 So is the story, “Clinton defeat inspires millennial men to gender equality”? Or more likely, “Garbage millennial men can’t make up their mind about women”?

I suspect it’s another, less sexy story: you can’t say a lot about millennials based on talking to 66 men.

Only if we pick 1994 as a starting point, as Coontz does, ignoring the dip just a few years prior, do we see a negative less-than half-percentage point drop in disagreement per year, significant at the 10-percent level.

As Columbia statistician Andrew Gelman wisely warns, none of these results account for the many, many paths the researchers could have taken to arrive at these results, which can make overreliance on any of these p-values problematic. For example, if we just looked at millennials the way they’re usually defined, as individuals ages 18-34?

The Pepin and Cotter piece, in fact, presents two additional figures in direct contrast with the garbage millennial theory – in Monitoring the Future, millennial men’s support for women in the public sphere has plateaued, not fallen; and attitudes about women working have continued to improve, not worsen. Their conclusion is, therefore, that they find some evidence of a move away from gender equality – a nuance that’s since been lost in the discussion of their work.

So what does this mean? Standard errors matter, and millennials might not always be as garbage as we think they are.

Emily Beam is Assistant Professor of Economics at the University of Vermont.