The 2016 General Social Survey is out! Time to update our trend lines, and mark our beliefs to market (as the economists like to say). I’ll start with one: how are attitudes towards free speech changing? Answer: Not very much. The GSS asks a range of questions on free speech related issues. The handy GSS explorer lets you look at trends over time for each question, broken down by various demographics. Here’s a key trend, looking at attitudes towards racist speech: 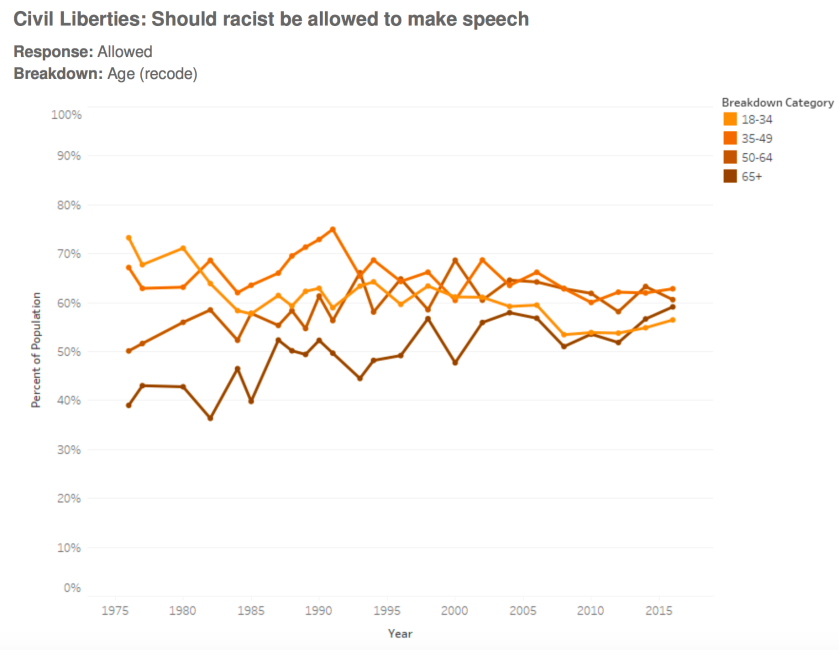 END_OF_DOCUMENT_TOKEN_TO_BE_REPLACED

I just had the pleasure of reading Federico Brandmayr’s forthcoming article in Science, Technology, & Human Values on “How Social Scientists Make Causal Claims in Court: Evidence from the L’Aquila Trial.” I highly recommend it. The article examines the testimony of three expert witnesses in a surreal trial about the culpability of scientists for making a bad prediction, and specifically the possibility that the scientists’ claims could have affected the behavior of individuals (to evacuate or not).

END_OF_DOCUMENT_TOKEN_TO_BE_REPLACED

Some background: since 2009 I’ve been working on grade transparency as one policy response to grade inflation, grade compression, and grade inequality at UNC. (See here, here, here, and here, among others.) After many, many meetings, conversations, presentations, and discussions, at last week’s Faculty Council meeting the Educational Policy Committee delivered a report on the policy that may well signal its demise. Below are the comments I made at the Faculty Council meeting in the discussion on that report. END_OF_DOCUMENT_TOKEN_TO_BE_REPLACED

This week is Spring Break here in Providence, so without further ado here’s some beach(?) reading.

END_OF_DOCUMENT_TOKEN_TO_BE_REPLACED

This story from Bloomberg on workplace accidents in Alabama’s booming auto plant sector is grim:

After several minutes, Elsea grabbed a tool—on the video it looks like a screwdriver—and entered the screened-off area around the robot to clear the fault herself. Whatever she did to Robot 23, it surged back to life, crushing Elsea against a steel dashboard frame and impaling her upper body with a pair of welding tips. A co-worker hit the line’s emergency shut-off. Elsea was trapped in the machine—hunched over, eyes open, conscious but speechless.

No one knew how to make the robot release her.

Workers with little to no training are coerced into working long shifts on machinery with known safety problems all to make barely more than minimum wage. Apart from the direct human misery, what’s most striking to me about these stories is how little impact they rate to have on our misguided national debate about the loss of manufacturing jobs and the need to bring factory jobs back on the presumption that such jobs are “good” (high-paying, safe, stable, full-time, benefit-providing, etc.) and are vehicles into a middle-class life. But the idea that “factory jobs are good, middle-class jobs” is only true in a world where workers and unions have the power to make them so. Factory jobs in the late 19th century were hellish. There’s nothing inherently good about jobs in any industry. Working for 10$/hour to get crushed by a robot because you are trying to make quota and no one trained you on how to shut the machine off when it malfunctions is back in that hellish direction.

A lighter topic for a grim and heavy news day: what are your favorite academic first lines? First lines are tricky, and most are forgettable enough, but a few stand out. I’ll post a couple below the cut, and ask you to supply your favorites in the comments! And while “first line of the book” is the usual rule, I think first lines of articles or chapters may be equally important for some texts (given how academic texts circulate), so interpret the instructions a bit liberally.

END_OF_DOCUMENT_TOKEN_TO_BE_REPLACED

It’s grad recruitment season for many sociology PHD programs. If you need a discussion topic to fill in those awkward silences, follow the links below!

END_OF_DOCUMENT_TOKEN_TO_BE_REPLACED

Christopher Newfield’s The Great Mistake: How We Wrecked Public Universities and How We Can Fix Them is a great book – you should buy it, read it, teach it, and recommend it to your friends. In an increasingly crowded field of books about the ills of contemporary higher education (many of which I also like), this one is particularly strong for its insistence on a systemic, political-economic analysis and its refusal to offer overly simplistic answers. In what follows I offer a discussion of the book’s argument and successes along with two critiques of elements that I think weaken its claims.

END_OF_DOCUMENT_TOKEN_TO_BE_REPLACED

Reducing fatal shootings by police officers is an incredibly important policy problem. Researchers have been stymied in studying the problem due to poor data, and limited resources for studying gun violence in general. The Monkey Cage today has a new post on a useful study that advances our understanding of police shootings. The authors, Jennings and Rubado, show in their research that police departments with policies that mandate reports by officers whenever an officer points their weapon at someone – not just when they fire a weapon – have significantly lower rates of shootings.

The interpretation of this important finding runs into a classic and immensely frustrating tension in social science research. Is this correlation or causation? And here the authors want to have it both ways, from the title of the piece on down. In so doing, they engage in what I have come to call the “correlation-causation two-step,” a ritual social science dance where results are described in clearly causal terms in one breath and then immediately disclaimed as mere correlations in the next.

END_OF_DOCUMENT_TOKEN_TO_BE_REPLACED

Happy Social Construction of Time Day! Every day is social construction of time day – but today more so than most. This post is a weekly link round-up of sociological work – by sociologists, referencing sociologists, or just of interest to sociologists. Before you go any further, make sure you check out Tressie MC’s appearance on the Daily Show and the coverage of her book in the New York Times! Ok, you did? On to the links!

END_OF_DOCUMENT_TOKEN_TO_BE_REPLACED

There’s been a lot of interest, post-election, in how individuals come to believe statements at odds with the best available evidence. There was probably a lot of interest before the election too, but with Breitbart seeming to be the main source of information for incredible claims by the White House, you can understand the attention. This week, two cognitive scientists published a NYT Op-Ed about their findings on “Why We Believe Obvious Untruths.” The studies they report are interesting, though I’m guessing Andrew Gelman might have a few thoughts about them (that the main study was published in Psychological Science is, at this point, more of a red flag than a marker of validation). But rather than discuss their data or its link to the larger claim, I want to point instead to the opening framing because it actually reinforces a commonly repeated myth. Here’s how the op-ed begins:

How can so many people believe things that are demonstrably false? The question has taken on new urgency as the Trump administration propagates falsehoods about voter fraud, climate change and crime statistics that large swaths of the population have bought into. But collective delusion is not new, nor is it the sole province of the political right. Plenty of liberals believe, counter to scientific consensus, that G.M.O.s are poisonous, and that vaccines cause autism.

While technically true – plenty of liberals do hold those beliefs – the claim at the end of this paragraph makes it seem like there’s an equivalence, that these are issues where liberals (but not conservatives) hold views in contradiction of a scientific consensus. The evidence does not support that claim. For example, 2014 data shows that conservatives, not liberals, are most likely to believe that vaccines cause autism. For GMOs, Pew reports that Democrats and Republicans are equally likely to believe that they pose health risks. I agree that “plenty of liberals” believe these things, but the impression this op-ed creates is that liberals believe these things more than conservatives. This claim is itself, ironically, a widespread, widely-repeated myth “counter to scientific consensus.”

I don’t know why “obvious untruths” are so commonly believed, but I can’t help but think that misleading writing in the service of creating false equivalence must be part of why this particular myth persists.

END_OF_DOCUMENT_TOKEN_TO_BE_REPLACED

The following is a guest post by Marcel Knudsen, a graduate student at Northwestern.

Why have a graduate worker union?

Recently, I read Susan Fowler’s blog post on sexual harassment at Uber. It’s a depressing story and a necessary read. I was struck by how everyone else at Uber did their best to tune out her experiences. Speaking up made her an irritant. Even after multiple colleagues had reported similar problems with the same supervisor, her only recourse after being ignored by HR was to leave the company.

The story shows what happens in an environment where workers don’t want to voice their concerns, where they focus on their own specific jobs and keep their heads down. What’s striking is that even these high-earning tech workers don’t think that they have any rights or ability to change their workplace. The individualization of people’s struggles, a lack of willingness to be involved or even to talk about Uber’s problems, made Fowler’s situation possible.