Two weeks ago, the LA Times ran an Op-Ed by Debra W. Soh on “The Futility of Gender-Neutral Parenting.” The central claim is old and fundamentally conservative: differences between men and women are biological truth, not to be meddled with by free will or society. Sex differences are facts to be accepted, not questioned or altered (two things feminists have always done). The op-ed circulated widely and was picked up by other outlets, including a New York Magazine piece titled “Yes, Biology Helps Explain Why Boys and Girls Play Differently.” Throw out your oatmeal baby room paint and desegregated toy isles. 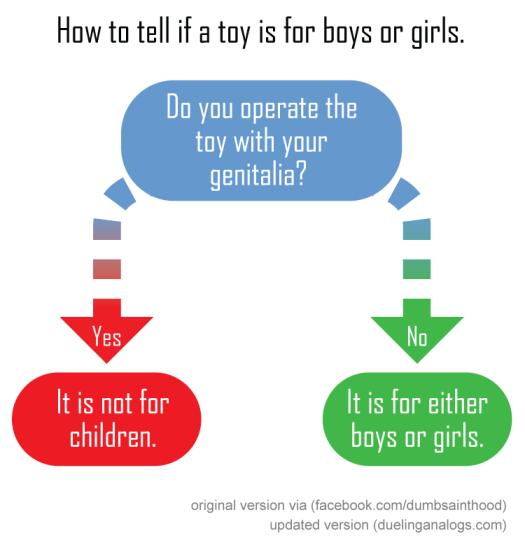 Soh provides a number of common scientific claims to back this point. She mentions that babies exhibit gender-typical toy preferences at 18 months, before they exhibit awareness of their gender. This sounds like perfect proof: differences before babies are socialized into gender must be biological. Except babies are socialized into gender from birth, as shown in the famous 1975 “Baby X” study, which found adults offered different toys and described babies’ responses to the toys differently depending on whether they were told the child was a boy or girl (regardless of the child’s genitalia).

Soh also mentions the ‘masculine’ behavior of girls with a condition known as CAH. There are many problems with CAH research design as well. Biologist Anne Fausto-Sterling addresses many of them in an endnote that sprawls a stunning five pages in her 2000 book. Soh then cites findings that vervet monkeys, without human socialization, preferred toys appropriate to their sex. With some digging, we can find the original study. When the researchers found that female monkeys spent more time with the cooking pot toy than males, they took it as evidence of a biologically female attraction to toys humans code as feminine—never mind that the monkeys don’t understand cooking or its gendered implications. This choice left multiple scientific readers bewildered. The authors briefly mention a more compelling explanation—female monkeys are known to be more attracted to reddish colors, so perhaps they played more with the two girl toys (the pot and a doll) because they were also the only two red toys. But they do not control for this obvious confounding variable. Discussing the study in her later work, one of the initial authors mentions only the doll, omitting the confounding color variable and the meaningless cooking pot. Few people citing the study mention that the male moneys spent equal time with masculine and feminine toys, either.

In another example, Soh points to a study that correctly identifies 73% of participants’ sex based on brain scans. 73% can sound like a lot, but with two choices, randomly guessing would give us 50% accuracy. While their method is somewhat (23 points) better than guessing, it’s 27 points worse than perfect. That is, a lot of people’s brains do not conform to the model that sexes are binary and different. Perhaps that is why surveys of this literature find “no consistent evidence of brain based sexual dimorphism exists.” Moreover, observing biological difference doesn’t mean biology causes social differences. Gendered social behavior has been shown to change the structure of one’s brain. The same has been shown for hormone levels, even back in 1979. Social factors, then, sometimes cause biological ones.

A Large and Longstanding Body of Research Literature

The LA Times Op-Ed matter-of-factly informs readers that a “large and long-standing body of research literature shows that toy preferences, for example, are innate, not socially constructed or shaped by parental feedback.” This is technically accurate: research to this effect has been prolific and dates back at least several hundred years. But that research has also been heavily critiqued and frequently debunked by scientists over the last 40+ years. Research to the contrary is itself a “large and long-standing body of research literature.” Some prominent authors within STEM fields include Anne Fausto-Sterling, a biologist who has written 5 books and numerous articles on the subject; Ruth Hubbard, the first tenured woman in Harvard’s biology department; Evelyn Fox Keller, a physicist; and Rebecca M. Jordan-Young, a sociomedical scientist. There is even a pop-science summary of this research field by a neuroscientist, Cordelia Fine. By ignoring this entire body of work, which responds at length and with scientific rigor to her specific examples, Soh gives readers the false impression that all research unambiguously shows social resistance to current gender patterns is “futile.”

Then, of course, there is the social science. This is where we get studies like Baby X, Emily Martin’s demonstration of sexist assumptions clouding biological research, Nelly Oudshoorn’s research on the historical construction of “sex hormones,” and Beth B. Hess’ incisive quip that “for two millennia, ‘impartial experts’ have given us such trenchant insights as the fact that women lack sufficient heat to boil the blood and purify the soul, that their heads are too small, their wombs too big, their hormones too debilitating, that they think with their hearts or the wrong side of the brain. The list is never-ending.”

Sociology is also where we find evidence of how sex-stereotyped behaviors are learned, planned, and enforced—none of which would be necessary (or possible) if they were “predetermined characteristics” like Soh suggests. This is a huge area of sociology. Erving Goffman’s 1977 “The Arrangement between the Sexes” is an early classic, but much more empirical work has demonstrated gender socialization since then by Raewyn Connell, Lorena Garcia, Karin Martin, Tay Meadow, CJ Pascoe, Barrie Thorne, and countless others. And then there are the cross-cultural studies showing gendered behavior varies widely across places and historical periods. Margaret Mead’s classic 1949 Male and Female is among the most influential. Personally, I love this post on the pink costumes marketed for boys in the 1955 Sears catalog.

What purpose does an Op-Ed like this one serve? Soh insists gender-neutral parenting is futile, and her disdain for it is palpable throughout the article. Soh is so invested in telling readers how (not) to parent (neutrally) that she ignores decades of scientific research showing that there are fatal methodological flaws in the studies of biological causes for gendered behavior. None of these critics say biology is entirely irrelevant—many are themselves career biologists. Even more to the point, she ignores decades of social scientific research demonstrating clearly that social factors do influence gendered behaviors like toy preference and STEM achievement. The data is in: gender socialization is not futile (but looking for evidence of biological sex determinism probably is).

Prescriptive claims based on innate biology present us with a telling paradox. If one really believes, as Soh professes to, that outcomes are biologically determined and socialization is irrelevant, why write an Op-Ed telling us we ought to socialize children into traditional gender roles? Why give any recommendations at all, if our actions have no effect? When the Borg tell us resistance is futile, they are trying to demoralize us into surrendering a fight we may otherwise win, into assimilating with their views even when it is painful or costs us our identities.

When sex difference research is used to make prescriptive claims (such as how to parent), a logical fallacy also takes place. Researchers look for differences between (cisgender) men and women, then build a model of what is masculine and feminine to describe what they see. This is a reasonable step (unless, of course, you consider the long history of research on intersex, transgender, and nonbinary people that complicates “men and women”). However, when someone turns around and says “this girl likes boy toys” or “boys’ rooms should be blue not oatmeal,” they mistake the model’s description of reality for reality itself. If she is playing with a different toy than the model of sex difference predicts, that is an error in the model, not in the girl.

Jeff Lockhart is a PhD student at the University of Michigan.

8 thoughts on “here we go again: biological and sociological responses to the latest sex difference op-ed”