In American Democracy, I argued that there are times in American politics when culture beats structure: when the popular will—the democratic culture, as Tocqueville imagined it—is represented even though political and electoral structures seem to interfere with or prevent such representation.

This was not such a case.

Earlier, colleagues and I wrote about four cases of what we called postmodern electoral crises. These events are characterized by actors strategically deploying structural tactics designed for unusual situations in the service of normal politics. Thus tools designed to represent the demos are used to shape or distort it.

This was closer to such a case.

That breakdown is incompatible with the image of hordes of newly liberated white working-class voters swarming to the polls to sweep Donald Trump into office. Trump lost ground relative to Romney as a share of VEP! But Clinton lost more ground relative to Obama. As of this writing, the story is similar at the national level, though harder to interpret precisely given changing vote totals and state-by-state differences. Figure 1 shows ratios as red-to-blue, county-by-county (thanks to Emmie Mears via Facebook). 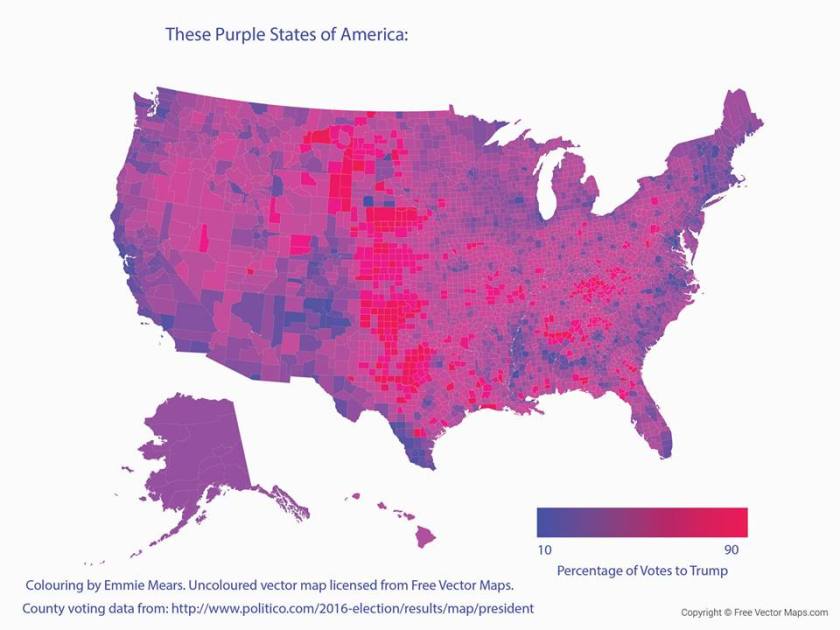 There are other structural stories to be told: voter suppression efforts (which largely failed in 2012) appear to have been successful this year in key states including North Carolina. It’s difficult for a party to defend the presidency for a third term. There are also relatively small-scale cultural stories: the timing of the FBI’s announcements about the e-mail scandal, for example; the Clinton campaign’s decision to focus on turnout over persuasion; the turnout-depressing effect of negative campaigns; and (in my view the most substantively important) the freak-show of a public sphere that has emerged.

Any one of these stories is likely enough, on its own, to explain the tiny margin in three states that would have changed the outcome of the Electoral College. We have an electoral system that is spectacularly bad at representing small differences; they are magnified into large outcomes. Culture roars back: in the face of a huge, meaningful outcome, the impulse to make huge cultural interpretations is strong. (As Foucault shows us, major events generate profligate amounts of discourse.) But I think it’s inaccurate and potentially dangerous.

None of the stories is sufficient to warrant a wholesale change in the political values or emphasis of the Democratic party, which is what some commentators are suggesting in the name of competing for white, working-class voters.

That said, I think it’s not unreasonable to imagine a Democratic coalition that would win 60-70% of the popular vote, both in North Carolina and nationally. There’s no good reason for them to be satisfied with a narrowly-divided, 50-50 split; the policy positions and inclusive vision that characterized, for example, the 2016 DNC Convention, ought to be able to attract a comfortable majority that would be resilient to these structural hurdles. That’s the cultural work to which the Democrats ought to set themselves.

Yes, that does mean listening to, and paying attention to, the concerns of working-class voters (white and not), as well as of downwardly-mobile precarious families in the lower middle class. That shouldn’t be a hard lift for a party with roots in labor and economic fairness. But it can’t be at the expense of the inclusive vision (derided as “identity politics,” as if white, male voters voting their race and gender aren’t doing “identity”) that the party has slowly built in the post-civil rights movement era. It also can’t rest on the demographic “new majority” theory; one thing we can learn from this election is that Democrats need to earn the votes of new voters, not expect them as the spoils of demographic change.

I plan to write more on this at a different point, but I don’t think the white working class is inherently bigoted; the Democrats’ cultural work should be opportunity and justice for all: an affirmative, populist platform with the capacity for a real majority.

(I hope and plan to write several more entries on the election, including one on the public sphere; one on public opinion and the character of the white working class; and one on the Democrats’ fling with global capital. But I don’t know if or when I will get to these, so wanted to go ahead and publish this one.)