I just came across a wonderful, short 2007 comment by Bruno Latour titled “Turning around Politics: A Note on Gerard de Vries’ Paper.” Science studies scholars, and Latour in particular, are often accused of having a wonky or non-existent notion of politics. In this essay, Latour goes a long way to clarify what sorts of politics STS scholars have done a good job of exploring, and which sorts they tend to leave by the wayside. Through his reading of de Vries, and his engagements with diverse political traditions from feminism to pragmatism, Habermas to Foucault, Latour identifies five modes of politics, five ways we might mean something is political in a useful sense. All five, he argues, must be part of our study of “cosmopolitics” in Stengers’ useful terminology. Below I reproduce the main chart that summarizes these five modes of politics – of which the first and fifth are often seen as apolitical and which STS and feminist research have made their mission to recast as political (but perhaps, in so doing, lost sight of their distinctiveness from modes 2-4). 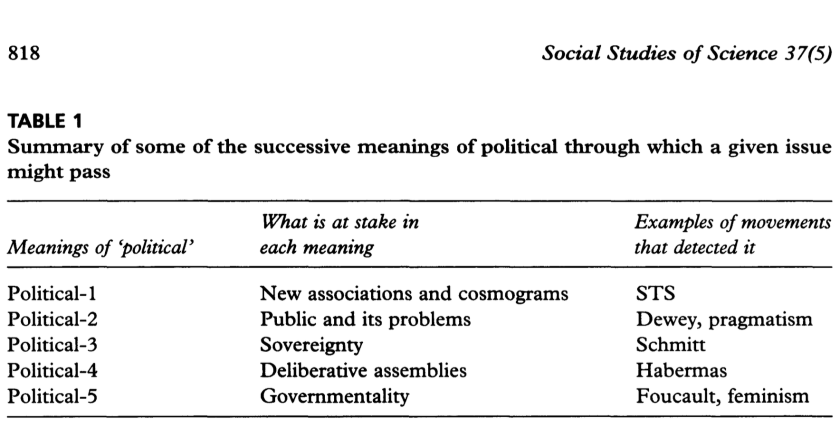 I’ll say that I wish I’d read this paper a long time ago, as it provides a much fresher and more synthetic take on “how STS does politics” than Latour’s older (but still wonderful, and totally worth reading), “Give me a laboratory and I will raise the world”, my previous go-to piece for the subject. What do you all think?

The below is an excerpt from my book that seemed relevant to the current moment. It’s presaged by this post from 2012.

Fact-checking during campaigns helps make sure the truth is communicated–but also teaches voters that there is a “right answer” and trains them to listen for true vs. false instead of right vs. wrong.

END_OF_DOCUMENT_TOKEN_TO_BE_REPLACED

Last weekend, Slate announced the use of social scientific tools similar to those used by campaigns themselves to anticipate results over the course of the day. Slate rejects, in editor-in-chief Julia Turner’s words, the “paternalistic” stance of the traditional media embargo on publishing results during Election Day.

Slate is making a bold move by ignoring the embargo, but in doing so they also appear to be ignoring the flaws of data science and a sacrosanct principle of both social science and journalism: skepticism.

END_OF_DOCUMENT_TOKEN_TO_BE_REPLACED

The brilliant Tressie McMillan Cottom has written up some excellent advice for people considering grad school in sociology and related programs. It’s too late for most of us, but as we advise others whether and how to choose grad school, it is tremendous food for thought.

END_OF_DOCUMENT_TOKEN_TO_BE_REPLACED

Last week the Daily Nous, a philosophy website, relaxed its commenting rules and allowed readers to anonymously comment in one of its threads using a fake email address. The thread asked, “Grad Students: What Would You Tell Your Prof(s), But Can’t?” END_OF_DOCUMENT_TOKEN_TO_BE_REPLACED

Timothy Carney wrote an article earlier this week decrying what he calls the “rampant abuse of data” by pollsters and the press this election season. He faults North Carolina’s hometown polling company, Public Policy Polling (PPP), among others, for asking “dumb polling questions” such as the popularity of the erstwhile Cincinnati Zoo gorilla Harambe; support for the Emancipation Proclamation; and support for bombing Agrabah, the fictional country in which the Disney film Aladdin is set.

While I agree with Carney that many of the interpretations of these questions are very problematic (and I should note that I have used PPP many times to field polls for my own research), I think he’s wrong that these are dumb questions and that the answers therefore do not constitute “data.” Quite the opposite: asking vague and difficult-to-answer questions is an important technique for assaying culture and, thereby, revealing contours of public opinion that cannot be observed using conventional polling.