Wanted to check in with my usual annual account of the books I most enjoyed reading in the past year. END_OF_DOCUMENT_TOKEN_TO_BE_REPLACED

Because December is the season for making lists, I’ve updated my sociological navel-gazing to create a 2012 edition of the most cited items in sociological journals.

Since there is no widely accepted list of sociological journals, I include those journals* where the majority of authors who list a department in their mailing address list one that includes the word “sociology” and which have a significant US editorial presence.† This totals 47 journals and includes all the ones you would expect along with some less widely-known journals, like Social Politics. I downloaded the 1,563 research articles published in these journals between December 1, 2011 and November 30, 2012 from Web of Science. That took nine–just nine–clicks, which isn’t so bad. For each article, I counted up which books or articles they cited, and then summed it all up. Journals that published frequently and publish lots of articles (like Social Science Research) or journals where authors tend to cite lots of things (like AJS) probably have undue influence by this measure, but simply counting the number of times something has been cited is a pretty good first pass at seeing what is being commonly referenced.

Here’s the top 25 (as an image, because I can’t do tables in WordPress):

If you want to waste some time, here’s the full list.

So, one in 33 articles cites Distinction. The majority at the top of the list are books along with a pair each from AJS, ASR and the Annual Review, along with one article from Social Forces. The authors and titles are truncated by Web of Science, so don’t blame me. Remember that the lists only counts citations in this group of sociology journals, so being famous in other worlds doesn’t get you on the list.

Fun fact: 2/3 of things that were cited last year were only cited once, and 95% of things cited were cited less than five times. And, unless one of your articles was cited nine or more times in one of these journals last year, you can consider yourself, like me, one of the 99%.

One thing that struck me was how old everything  on this top list was. The median publication year in the top 100 was 1992. Of the top 100, only one piece was published in the last five years. The author ended up at boarding school for future investment bankers, so there is a price to pay for influence.

More generally, things aren’t that bad. It turns out that the average thing we cite is ten or eleven years old. There is a lot of factors that go into what items get cited and how many times, such as the number of papers published in an area or the degree to which there is a common puzzle or cannon in a subfield.  But we don’t seem to be in a hurry to cite new stuff. Or alternatively, we aren’t easily swayed by the newest research trend.

I don’t know how that has changed over the long term, but I just ran the numbers for articles published in 2009 in the same set of journals and got the same median lag of ten years.

On a side note, it’s my understanding that Journal Impact Factors are often computed using citations to articles published in the last two or five years. Last year, 93% of the stuff we cited was more than two years old and 78% more than 5 years old, further complicating these measures.

† My method of identifying sociological journals doesn’t really work for non-US journals as it appears non-US folk are much more likely to lists themselves in things like “School of Social Policy.”  Sorry. You can ballpark the effect of including these journals by adding 327 cites to Giddens’s Modernity and Self-Identity and including a couple of works by John Goldthorpe to the list.

This story in the NY times is a pleasant read among all the bad news in the digital papers these days. It shows that recent data reveal an interesting trend–support for same-sex marriage among all age cohorts:

As Shamus and others have remarked, this is a very dramatic shift, which is very unusual for public opinion. Cohort turnover, rather than changed minds, explains most changes in opinion over time, but this issue is different.

I have done some work that shows a similar trend in attitudes toward homosexuality–attitudes changing in all age cohorts, in addition to generational turnover–and the story today reminds me of that time I was just fiddling around with those World Values Survey data. This was way back in time when the blogosphere was young: 2005. I didn’t really trust myself to do data analysis, and I checked in with Jeremy Freese to get some help with how to interpret the data. He asked me the million-dollar question (which I still have, thanks to gmail): END_OF_DOCUMENT_TOKEN_TO_BE_REPLACED

I don’t envy those researchers who collect and analyze retrospective family history surveys. The data can be a real mess.

Mark Regnerus recently released the raw data from his New Family Structure Study (NFSS). I thought that many researchers would want to reanalyze the study, so I attempted to put together a Stata do file that replicates the original analyses that were published in Social Science Research. I’ve also posted my version of the full regression tables, which weren’t in the original article. The article is quite clear on how most of the items were constructed so it wasn’t too difficult to put this together for most of the variables.

The items that were most difficult were those dealing with family structure growing up. I haven’t been able to get my numbers to match Regnerus’s for all the different types of families. Largely this is because the item being measured is quite messy with multiple overlapping categories. If someone else can figure out how Regnerus got his numbers, specifically the step-parent and single parent categories, please send me the code and I’ll incorporate it in my publicly available do file.

An additional problem when analyzing the data is that an individual’s answers are often quite contradictory.  While sometimes this can create sociologically interesting questions, like under what conditions do people change their self-identified ethnic/racial classification, other times you just want a decent operationalization of the concept, like how many respondents lived with two moms?

END_OF_DOCUMENT_TOKEN_TO_BE_REPLACED

On behalf of an anonymous reader:

After submitting an article to a journal, I have received a revise & resubmit decision along with two reviewer reports. The changes suggested by the reviewers and the editor seem reasonable and doable. However, it has occurred to me after I received the reports that the statistical model I used has limitations. These limitations had neither occurred to me before, nor were they noted by either of the reviewers or the editor. I think the sound thing to do would be to change the model and the data for this are available, but I am concerned about how this will look to the reviewers and the editor.

If you are one of the twelve people who follow me on Twitter or one of the three people who follow the RSS feed for my website (Hi, mom!), you’ll know that I’ve been tracking the sociology job market this year. My method is pretty crude. I download all the job postings to the ASA Job Bank each month and count which ones have variations of the phrases “tenure track” and “assistant professor.”

As of the end of November, here’s what my monthly count of advertised tenure-track sociology jobs looks like: 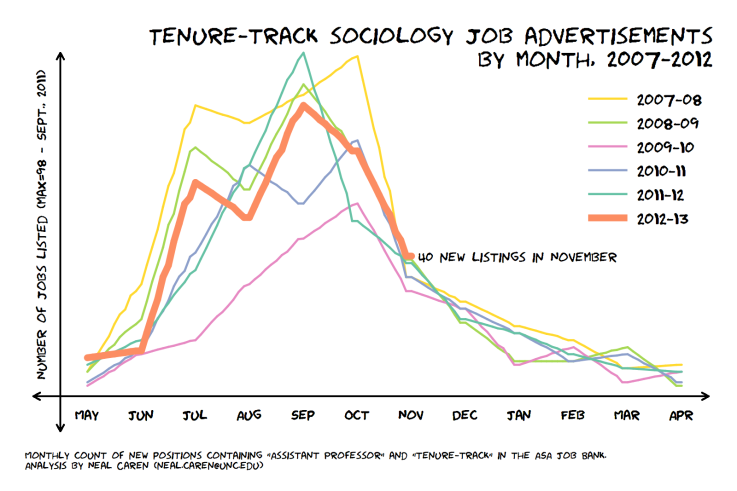 In prior years, about 80% of jobs that were going to be listed were posted by the end of November. Based on that, I estimate that we’ll come in at about 410 jobs this year, which is 15 jobs less than my forecast based on July, for those who care about that sort of thing.

My best guess is that this is about how many jobs we can expect to see posted in the coming years. I doubt we’ll see a surge in money for hiring in the social sciences given the current political and economic climate.