Occupy Toronto has been going strong for a few weeks now, hosting protest marches on Saturdays and camping out in a park downtown, not far from Bay Street, Toronto’s financial district. Some might ask, why would Canadians want to participate in this movement? Canadian banks were subject to much stricter regulations than their American counterparts, and this meant that the subprime mortgage crisis, and the collapse of financial institutions that necessitated a more-than-major bailout stopped at the border. Canada didn’t make bad loans, our financial companies were not implicated in the mortgage-bundling schemes of Wall Street, and so our recession is not so much the product of Canadian policy as it is the result of our economy being so reliant on trade with the United States.

END_OF_DOCUMENT_TOKEN_TO_BE_REPLACED

We got the attached invitation to a Jewish holiday celebration (not our congregation) via email. Note the advertisement evite chose to pair with a Jewish event! 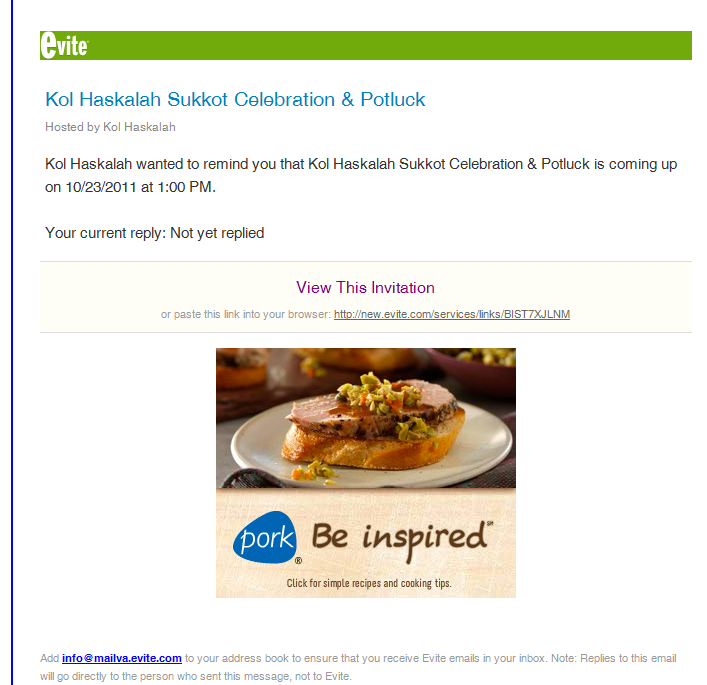 We’ve all heard that getting faculty to do anything is akin to herding cats. This post describes the process of doing so in a way that literally made me cackle out loud.

Just my impression, but it seems like progressives are more and more doing this kind of thing: directly attacking unfair attack journalism instead of either being overly calm or just avoiding the networks.

A friend of mine received the following request for an interview from a radio news program, who wanted an expert to discuss the Occupy Wall Street protests.

Wanted someone who could explain to us if this appears to be an actual political movement or just hundreds of teens and college kids getting together to protest nothing in particular? Do they actually understand what they’re trying to protest?  Is there a difference between a political movement and a movement for social change?

From the outside, they mostly just seem to be a bunch of uninformed, unemployed losers without much of a grasp on what actually is going on in the Country and I wanted someone to help us and our audience understand what is going on.

It’s tough to take the media seriously when they are playing a right-wing Unfrozen Caveman Lawyer from the initial email.

Funny, or terrifying? iPad makes baby confused about what to do with a “magazine.”

Norwegian sketch comedy! Envisioning what tech support for new technology was like in medieval times.

NEW BLOG ALERT: The Organizations, Occupations, and Work section has started up its own blog. Check it out!

I think this is a wonderful idea — an ASA section setting up a blog to discuss ideas, convey interesting research in their area, and dialogue with the public. Check them out. Welcome to the sociology blog world, OWW!

I have an outstanding R&R at Journal X. I submitted my last set of revisions in March and I have since sent three inquiries about the paper’s status and received no response to any of them. Is there anyone else to contact when an editor is unresponsive? Do I have any recourse other than pulling my paper to submit it elsewhere?

I fear that Robert Jeffress’ recent comments are a harbinger of things to come — the public expression of intolerance and bigotry. Now, had this happened against Jews, or gays, or Muslims, or women, or Lations, (that is, “you should vote for Perry over X person because X belongs to _______ group”) I suspect there would have been more rage on the part of the left. But I feel there has been tremendous silence on this issue, and an unwillingness to confront this kind of prejudice. Some of this is no doubt because many on the left are probably happy to see infighting on the right, on the assumption that it weakens them. Some, I suspect, is because of anti-Mormon sentiment. This, after all, is the church that has lobbied against gay marriage, and is seen as being rather conservative. But it is quite a different thing to claim we should confront positions we disagree with than we should not support people because they are members of some group. It is perfectly acceptable to not support Romney for his politics, should you disagree with them. But not confronting and condemning intolerance — even if it is against a group or person we don’t feel a particularly strong affinity with — is a dangerous precedent.

I posted something on facebook that was rather critical of Steve Jobs. Teppo asked that I discuss it at greater length on scatterplot. So here goes. I think people are not wrong to suggest that Jobs was one of the most influential people of the last quarter century. I would call him “A Hero of Our Time.”* He’s representative of and helped usher in the changes in our world — both profound and disturbing. He changed the way we live our lives, in part by increasing the way in which our relations are mediated by objects (whose distribution could not be said to be anything close to “equal”). He was also a capitalist, par excellence.  END_OF_DOCUMENT_TOKEN_TO_BE_REPLACED

The New Yorker has a good, thorough article on Art Pope, right-wing political benefactor in North Carolina. It’s interesting, and demonstrates the pervasive nature of Pope’s influence on NC politics, education, and culture. However it does make some of the same mistakes often made in discussions of money and politics.