It seems that Wal-Mart’s lawyers are not arguing that they should be immune from lawsuits for the now-mundane reason that they are “too big to fail” but that they made a fail too big to prosecute (h/t newser). In the continuing saga of its epic gender-discrimination suit, the corporation is asking the Supreme Court to block a ruling by the Ninth Circuit that the female employees of Wal-Mart comprise a class. In a brief filed on behalf of Wal-Mart, one lawyer argues:

The class is larger than the active-duty personnel in the Army, Navy, Air Force, Marines, and Coast Guard combined – making it the largest employment class action in history by several orders of magnitude.

In other words, “Dear Supreme Court: We discriminated against soooooo many women that it is going to be really hard to deal with this case. We’ll tell you what: in exchange for you forgetting about this case, we will make sure that you don’t have to deal with all of its complications. Sound good? Great! Love, Wal-Mart P.S. Although ‘too-big-to-fail’ is kind of ho-hum these days, we would like to try that too.”

END_OF_DOCUMENT_TOKEN_TO_BE_REPLACED

Consumers owe more on student loans than they do on credit cards. That’s a lot of money. We’re talking $850 billion. And while loan debt is “good debt” — it also is subject to conditions that make it largely inescapable even in dire situations. Will higher ed have to be restructured as these debt loads increase, and we soon hit the limit of where full-pay families can afford our services? If tuition/fees keep going up at around 5-7%, that day isn’t long away.

From report by By Steve Rendall and Zachary Tomanelli at  Fairness and Accuracy in Reporting :

FAIR’s study examined every episode of After Words from March 2008 to January 2010, and the reviews of politically themed books in the New York Times Book Review from January 2009 to February 2010. In total, the study counted 100 episodes of After Words and 100 reviews in the Times. In each case, the author(s) and reviewer/interviewer were classified by ethnicity and gender. (Because some books had co-authors and some reviews encompassed multiple books, there were 120 authors of 111 books in the Times reviews studied.)

They find a strong White male bias overall. The strongest finding is that 95% of the US book authors  were non-Latino Whites and 96% of the US reviewers were non-Latino Whites (compared to 65% of the US population). There was a slant for non-US authors, too:  “Of the 12 non-U.S. authors in the Times (10 percent of the total), 10 were white British, one was Israeli and one—Tariq Ali—was Pakistani-British.”  Women were also barely represented: 13% of book authors and 12% of reviewers. Only two women of color made the pages of the NYTBR, both as authors; zero women of color were reviewers. After Words was also slanted, but much less so. Of the handful of non-White people in the NYTBR, the large majority were writing on “ethnic” topics.

In an interview about this study on NPR , Christopher Lehmann-Haupt, a former editor of The New York Times Book Review through 2006 (and so not necessarily responsible for these numbers) seems to gabble around the issue, as far as I can tell, suggesting that the numbers are shocking but can’t possibly be due to any kind of pro-White bias at the NYT. First he says: “But that’s always the aim is to find the most interesting books. They get, what, 50,000 books a year. They go through them. They are always conscious of the fact they were newspapers, so they respond to what seems politically important, what seems to be of interest to their readers. And that’s how those choices are made. They’re never made are we representing, you know, (unintelligible).”  And then, when pressed, seems to blame the major publishing houses for not publishing books by people of color. “Well, I think that, again, you have to go a little bit deeper. Publishing has become is going through a real crisis now. The most obvious thing is that the so-called midlist book, the book that isn’t going to be a bestseller, isn’t being published to the degree that it was, say, in the 1960s, where there was a conscious effort to represent diverse views, races and so forth.I think it reflects what’s being published. Does the book review – I don’t know what’s being published by smaller presses that might be publishing Latino writers, for example, African-American writers. But the major houses are simply doing less diverse books in every respect because they are aiming for the bestseller list.” When pressed about the lack of reviewers of color, he talks about the women on staff.

Thanks to White Readers Meet Black Authors for the tip.

I am writing up a set of instructions for my student co-authors on how to work together on a shared Word document. My own graduate education had abundant training in the word processing arts (owing to a 2nd job I had to take to make ends meet), but I find that not every graduate student has a deep knowledge of WordPerfect 5.1 MS Word. So far, I have these tips: END_OF_DOCUMENT_TOKEN_TO_BE_REPLACED

I found this earlier today while browsing the program for this year’s ASA Annual Meeting: 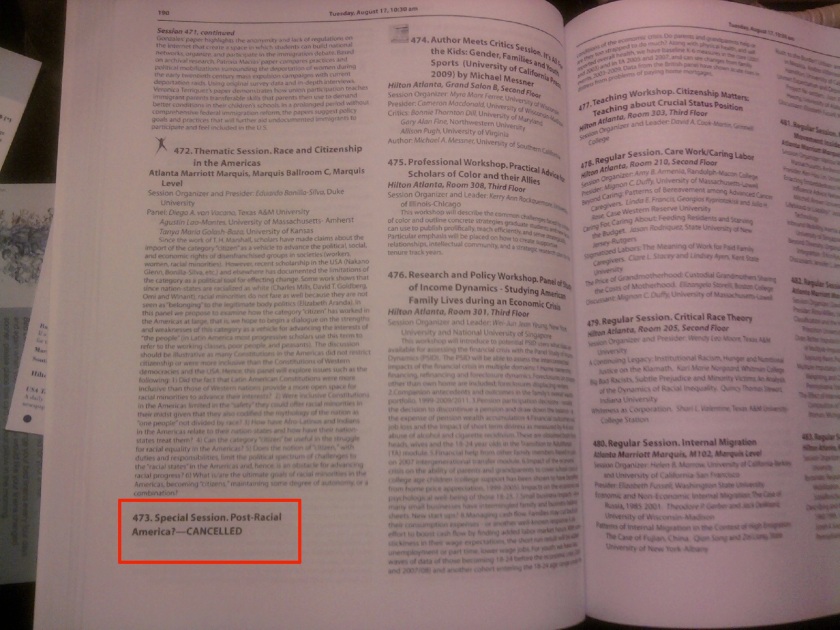 So by now hopefully you all know this, but in case you are a late arrival or are insufficiently networked, the code for access to the ASA wireless in the conference areas is 04DAE4. It was being handed out on little slips of paper.

On our local public radio station this afternoon, state capital reporter Laura Leslie had this to say about the National Organization for Marriage‘s rally in Raleigh today:

That was the final sentence in the story. The complete story is here.

UPDATE: There’s a much more detailed, nuanced, and interesting description on the reporter’s blog here. My concerns apply only to the radio story, certainly not the attendant blog entry!

I understand that there is pressure to frame all disagreements in terms of rights violations. But I seriously doubt if Mr. Brown can cite a single actual civil right that is threatened for heterosexuals as a class. Sadly, Leslie did not press him to name one of these rights or, more broadly, to explain or document his claim. Thus we are left with a classic of American journalism: tell both sides of the story, even if one side’s claim is indefensible:

Joe said the earth is round. Jane said it’s actually flat and cut out in the shape of a lovely floral arrangement. This is Mike Smith reporting from Raleigh.

END_OF_DOCUMENT_TOKEN_TO_BE_REPLACED

I’m sure you’re all very busy selecting outfits and putting the finishing touches on your presentations, but I wanted to remind you that the scatterplot baseball game is this Friday, Aug 13 at 7:30pm: Braves vs. Dodgers. We’ll be in Section 402, Row 14; if you aren’t in our block, buy a single ticket in the cheap seats and come hang out with us if you like. And of course, the annual awesomesauce blog party is Monday night, Aug 16 at 8:30pm at Max Lager’s Brewpub at 320 Peachtree St NW. I know that we will miss a few of you who are leaving early, but I hope everyone else can come on down and say hello. See you there!

I have a new piece in GOOD (one that didn’t get rejected for being critical of their sponsor!). And now I’m starting to get emails asking, “so, what is to be done?” I get this question a lot, particularly in classrooms. In a recent interview on inequality by Channel Arte, I’m pretty sure I pissed off the interviewer by basically saying, “I have no idea.” I often find the last chapters of books — the ones that are proscriptive — to be the worst. In my own work I’m very hesitant to talk about “should” statements. But for most non-academics, this can be really annoying — we’re all about criticism and have nothing to say about solution. One of my colleagues has a stock answer to all of this: “This is the kind of question you should ask policy people; those who are trained to think through these things.” I don’t find this to be satisfying. But I do think the impulse to think about the necessity of policy training for “should” claims to be an interesting one. To a degree I think some of the problem has to do with the logic of scientific inquiry. One wherein we seek to reject rather that affirm propositions. But I’m curious how others handle these questions. How do you answer the, “what should we do?” question? I often talk about what has be shown not to be effective, but I really hedge on positively affirming a particular position. In my next piece for GOOD I’m going to go out on a limb and see how that goes. But I’m curious if others have felt more confident with should statements, and if so, how/why.

I am, of course, thoroughly delighted with the California federal court’s decision overturning Prop. 8 as unconstitutional under the due process and equal protection clauses, doubly so because the judge, Vaughn Walker, is a card-carrying conservative. I am also thoroughly delighted with the Massachusetts federal court’s ruling the DOMA is unconstitutional on grounds of states’ rights. However, I am a bit confused at what seems to be a contradiction between the two rulings. The Massachusetts case seems to claim that DOMA infringes on states’ rights to define marriage for themselves–that is, that federal law should not determine how states may define and regulate marriage. The California case, on the other hand, argues that the state’s decision on how to define and regulate marriage is wrong and violates federal law. Now, I thoroughly admit that IANAL and so there is likely a way that these two decisions can…er…cohabit. Thoughts?

UPDATE: I’m reading through the California decision instead of working on a pressing deadline…. it makes for great reading! There’s quite a bit that is essentially about how best to gauge the reliability of social science, and much of it picks specifically on David Blankenhorn, to wit:

Blankenhorn’s book, The Future of Marriage, DIX0956, lists numerous consequences of permitting same-sex couples to marry, some of which are the manifestations of deinstitutionalization listed above. Blankenhorn explained that the list of consequences arose from a group thought experiment in which an idea was written down if someone suggested it. Tr 2844:1- 12; DIX0956 at 202.

Earlier I asked for advice about indexing. I decided to do it myself. Here’s what I learned:

1.) This is tedious work.
2.) It takes about 2 days, and has two parts. END_OF_DOCUMENT_TOKEN_TO_BE_REPLACED

Posted on behalf of a reader–