Beth Duckles has a nifty thought on collecting data from students (for polls, feedback, etc.): using Google forms to collect the responses, then saving them as a spreadsheet to import into your favorite statistical package to analyze. Very useful, indeed.

I thought I’d toss this out for discussion. A young sociologist I know submitted a newly-written unpublished paper to ASA. After a long delay it was eventually accepted to a roundtable. In the meantime, the sociologist sent the paper for review to a non-US on-line specialty journal, expecting the usual review/publication delays. To the person’s amazement, the paper was not only accepted immediately for publication but is scheduled to appear (on-line) before the ASA meeting. The paper was submitted to ASA in good faith as an unpublished paper that had not been presented elsewhere. Do you think the scholar should withdraw the paper from the roundtable? My answer is no. But I thought it could be interesting to hear other people’s thoughts.

Sociology confession: I have never attended a roundtable session at ASA. A student asked me today how common it is for the audience for roundtable presentations are just the other presenters. I don’t know the answer. 20%? 50%? 80%? Anybody have an informed guess?

My browser (Firefox) has a feature that is usually very useful. When I search for a journal article on the web (i.e., not through a library subscription search engine), it bumps me over to my library’s login page, so that I can view the article through their subscription. I don’t know how this works, but it is really convenient, so I never questioned it until now. The problem is that when I look up the redesigned ASA website, my browser bumps me to my library login page, as if this is a subscription-only service. Same story when ASA twitters a link to its page; I can’t get to it without logging in.

You might be thinking, “Tina, why don’t you contact the ASA to see what is up with that?” END_OF_DOCUMENT_TOKEN_TO_BE_REPLACED

OK, it’s time to order books for the fall (zoinks!). I’m really excited about my graduate seminar in the fall, Advanced Social Theory, the first time we’ve been able to offer an advanced (meaning beyond one single semester!) social theory graduate course in the 9 years I’ve been here. I offered three general ideas for the course:

To my delight, the overall response has been most positive for option 3, so this time around it will be a “where the rubber hits the road” kind of course, considering current theoretical work that is in one way or another closely tied with empirical research.

So, dear scatterbrains – I ask you, what books shall I order? Of course article-based material will constitute a substantial portion of the syllabus, and that can be added later, but I need to order a few books. I think I’m looking for 3-4 books. Some of the possibilities I’m considering are below, but I’d love to hear your other thoughts too.

In no particular order, here are some of my ideas:

It’s strange how many manuscripts one sees in which the worst written paragraph of the whole thing is the abstract. Granted, when I finish papers, I’m usually so sick of the thing that writing the abstract requires finding and tapping a whole new reservoir of will, but: if a paper is published, it will be the single most read paragraph of the whole thing, so it’s well-worth putting the time into getting it right.

(Also: I wonder if part of the problem is that writing pedagogy in general includes little/nothing about how to write a good abstract.)

Is anyone excited about the Atlanta ASA meeting yet? Let me try to get things started with an invitation to join us bloggerly types at a good old-fashioned National League baseball game:

I wasn’t able to make the game last year, but from what I hear, a great time was had by all. Perhaps you folks who saw the game, drank the beer and shouted epithets at the umpires can share your stories.

I will buy a block of tickets–probably in the $20ish seat range at the top of the stadium–for anyone who wants to join us. Send me an email at fetner [a t] gmail [d o t] com.

Can you spot any problems with this logic?

People argue about how important “socialization” versus “biology” is for causing shyness. Well, evidence is abundant that children who exhibit shy behaviors grow up to report higher levels of shyness on questionnaires as adults. Therefore, socialization is more important than biology. Sociology wins!

OK, if you see the problem with this, do you think you could still see the problem even if we placed the example in a more politically relevant context and included tables with numbers and stars and such?

If the answer is yes, I’ve received several manuscripts to review for sociological journals over the past few years that it would have been nice to have you as a fellow reviewer on, because I have come to feel kinda rude being apparently the only one who ever suggests that there is any problem to taking the adage “the past predicts the present” as some great triumph of the sociological imagination.* END_OF_DOCUMENT_TOKEN_TO_BE_REPLACED

The scatterplot banner seems to have gone bad — the link is still there but the scatterplot logo has disappeared. Let us know if you know how to fix this.

After presenting lots of statistics about racial disparities in criminal justice, I showed my class the videos from ABC News What Would You Do? in which first White and than Black youths vandalize a car in a public parking lot. There is only one 911 call on the White boys, but ten on the Black boys. Plus, while the White boys are vandalizing, someone calls 911 to report people who are suspected of planning a robbery — Black kids asleep in a nearby car! Well, most of the class, as expected, saw this the way I did, as evidence of a racial problem. I was trying to emphasize that not arresting Whites when they commit crimes is just as important in racial disparities as arresting Blacks. Some students pointed out (correctly) that it was a demonstration, not a controlled experiment and wondered (fairly) whether the producers selected cases for their strong differences. But a few very vocally insisted that the difference was not about race at all, but that the Black kids were wearing “gang clothing.” They got somewhat offended when I said, “yeah, Black styles” and then cut off that line of argument, saying “OK we disagree on that, but I don’t want to spend the rest of the class arguing about clothing.”

Today I went back to the video and took screen shots of the kids. They are all wearing hooded sweatshirts and jeans, as I said. (One student had insisted that the White kids wore tucked in shirts! Not so.)  There are subtle differences in how they wear the clothes, though. The Black kids’ clothes are bigger on them (and the kids themselves appear to me to be smaller). The White kids’ shirts have words on them which I assume are school names (the resolution isn’t good enough for me to read them) while one Black kid has some sort of design on it that you could construe as edgy — it is definitely not preppy. One Black kid is wearing a cap which (as can be seen elsewhere in the video) is a gold weave thing that I cannot imagine a White kid wearing, but he’s wearing it in the same way as lots of White kids wear baseball caps. In my view the only difference between the clothing was subtle differences in style sensibilities between Blacks and Whites, and that calling the Black kids’ clothing “gang attire” is ridiculous. These few students think that if the Black kids had been in “non-gang” (i.e. “White”) clothing, the result would have been different. (They did not even suggest dressing the White kids in “gang” styles.) I think they are just exhibiting extreme resistance to the obvious. (The same students criticized me for failing to show examples of Black crime.) Opinions?

Edit: I decided also to include shots of the kid wearing the distinctively Black hat which also show that he is wearing a do-rang under it.  As far as I can tell, this is not gang attire. Do you think the dissident students are right that the do-rag and hat made the difference, not skin color?

Here are the links to the two videos:

Yo, OrgTheory: I see your poll and I raise you…

So, like many of you, I recently received the latest issue of the American Sociological Review. This is evidently the first issue to ship from the new editorship and I’m pleased to see that a number of interesting-looking articles are in it. At the same time, I was somewhat surprised by the new look: 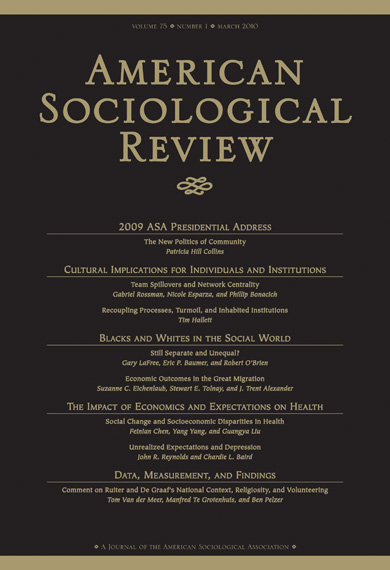 That’s definitely a bold change from the sorts of covers we’ve seen previously, and I’m forced to commend the willingness to move in a new direction. And yet, I couldn’t help but feel like I’ve seen this sort of thing somewhere before. Why does this cover seem so familiar?

And then it hit me…
END_OF_DOCUMENT_TOKEN_TO_BE_REPLACED

A well-done viral video, I thought, targeted to the viewer: